Welcome to the xGreenwood World

The Premier League’s “Project Restart” is going swimmingly well for Manchester United’s teenage sensation Mason Greenwood. He just can’t seem to stop scoring – belting them in from all sorts of angles, defying conventional wisdom and a lot of analytical insights to score outrageous efforts for Manchester United.

In fact, his stock has skyrocketed so much in the last month that England manager Gareth Southgate is considering calling him up to the senior international team. Greenwood, or xGreenwood as I like to call him, is lighting up the footballing world at a dizzying pace.

I’ve seen comparisons to Wayne Rooney’s initial years – when he burst onto the scene at Everton. I personally think Rooney had a lot more to his game than what Greenwood has right now but that’s a debate for another article! Let’s just say that Greenwood has propelled himself into the upper echelons of teenage sensations and he isn’t showing any signs of being daunted by the occasion.

But here’s the key question – is Greenwood really that good or is his current form an aberration? Should we look at his scintillating form as a purple patch or take it as a sign of things to come?

I’ll showcase some of the underlying numbers behind Greenwood’s Premier League performances this season to answer these questions. And trust me, his numbers make for some really interesting insights.

First, a Look at the Key Numbers Behind Greenwood’s Season

I’m only going to look at the goals Mason Greenwood has scored (this article isn’t about his participation in the build-up play or how many assists he should have). So with that in mind – let’s take a look, shall we?

Greenwood has appeared in 26 Premier League games this season, though the majority of those have been as a substitute. Ole Gunnar Solskjaer knows the devastating effect Greenwood’s pace can have against a tiring team and he’s used that quite a bit this season. And Greenwood has played predominantly from the right-wing, where he has the luxury of cutting in and shooting from his rocket of a left foot. That partially explains why his goals are hit with such ferocious power but we’ll look at that aspect in a bit.

Greenwood has scored 8 goals in the league in his 26 appearances – three of which have come after the restart last month. Now here’s the kicker – can you guess his xG (Expected Goals)? His xG numbers actually tell a whole different story so I want you to take a guess before you read on.

His xG is just 2.7. That’s a HUGE difference in his xG and actual goals scored (over 5). What does that even mean?

It implies Greenwood is outperforming expectations spectacularly. Given the shots he’s taking, considering the angles of those shots, the positioning of the defenders and the goalkeeper – all of those combined indicate that he should only have scored ~3 goals. Instead, he’s hammered in 8 – a significant achievement.

Now, here’s where xG typically comes in handy – it doesn’t just tell us the current scenario – it’s quite indicative of how a player would perform in the near future. In a small sample, which is what Greenwood’s current form is, even a great player like Lionel Messi can look like an ordinary footballer (he recently took 18 shots without scoring). But over a larger sample size, the xG numbers and the actual goals scored tend to fall in line.

Take the example of Teemu Pukki. He started the season like a house on fire, scoring left, right and center and propelling his Fantasy Premier League value to skyrocket. He scored his first six goals from an xG of 2.3. By the time Pukki had his eighth goal, he was at xG 4.8. Now he has 11 goals from an xG of 10.7. You can see how that tends to fall in line over time.

Where is Greenwood Scoring his Goals From?

This is a key question because it shows us how difficult a chance it was that Greenwood converted. Remember – the more difficult the chance, the lower the xG value. This indicates either a purple patch or that the player is a world-class finisher.

And Greenwood’s goals have defied xG all season long.

Here’s his goal map from understat.com:

The size of the circle indicates the xG value. As you can see, except for the big circle at the edge of the 6-yard box (his first Premier League goal), all of the other goals have a really low xG value. The two rockets he scored against Bournemouth at the weekend had xG values of 0.07 and 0.11 – a 7% and an 11% chance of scoring respectively. Those shots aren’t supposed to go in, but Greenwood’s peculiar style of hitting the ball like it’s offended him personally renders his xG moot.

But it’s not just the fact that he pummels the ball that makes Greenwood special. He can caress it into the back of the net as well – as he showed against Everton and Norwich.

And the sublime finish against Norwich (0.03 xG):

Notice how he quickly shifts the ball to his left, making the defender take a step in that direction, opening his legs just a little bit and shooting between the gap so the goalkeeper can’t see it until it’s too late. It’s a technique his manager Solskjaer mastered during his playing career so it’s not difficult to see where Greenwood is picking that up from.

And when it comes to his pulsating long-range belters, there’s a technique behind that too which Greenwood seems to have mastered. Notice this goal he scored against Bournemouth where he has both feet off the ground when he took the shot: 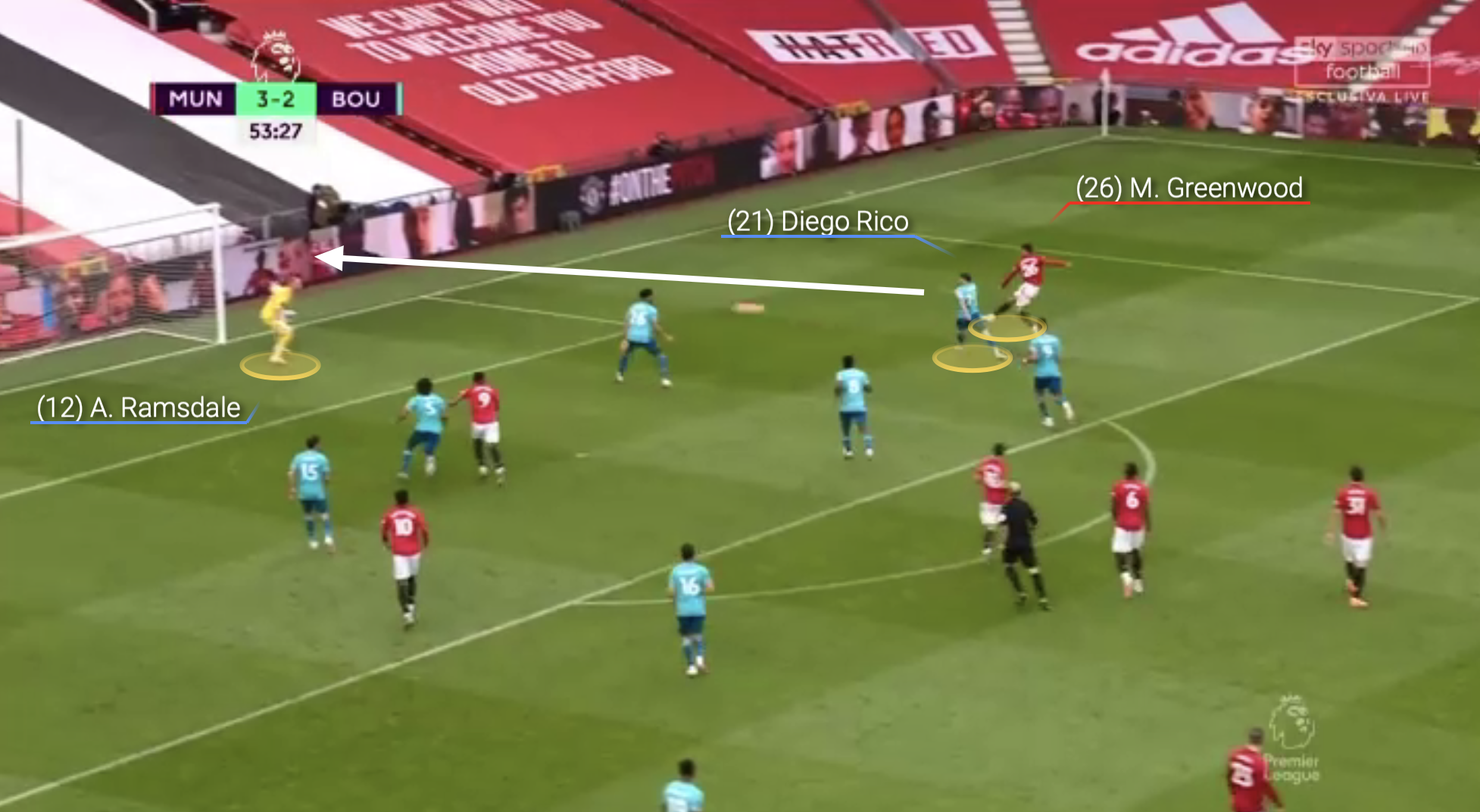 He puts all his power into the effort where he twists his body enough to generate whiplash behind the shot. That makes it virtually unstoppable, even from what appears to be an absurd angle.

In short, this isn’t a temporary phase of Greenwood’s burgeoning career – his fundamentals are remarkably strong.

How does Greenwood Compare to Similar Players?

28 players have notched 8 goals or more this season in the Premier League. So how does Mason Greenwood compare to them?

I love this table by the Athletic where they show the goals scored, the xG, and the xGD of the top 10 players:

xGD is the xG Ratio – goals scored divided by the xG.

Greenwood is head and shoulders above the rest. De Bruyne has the next best xGD of 1.62. As I said before, Greenwood has only started a handful of games and this is a small sample size right now. For example, Vardy’s 21 goals show how remarkably consistent he is – something Greenwood would need to emulate as he grows in his role.

So what does all of this tell us? Mason Greenwood is outperforming his xG by a huge margin so history would tell us that his numbers will decline once he gets more matches under his belt.

Now here’s the thing – xG, as complicated as it’s become, tells us about the nature of the shooting opportunity, not the finishing quality itself. And Greenwood has demonstrated he has a unique skillset – raw power and an understated placement technique – that could well defy his xG numbers for years to come.

I would still expect his goalscoring numbers to decline next season as teams become more familiar with how he plays, his body position when he shapes to shoot, how to exploit his weaknesses, etc. But if Greenwood can add heading ability to his portfolio – he could become a key player in United’s future.