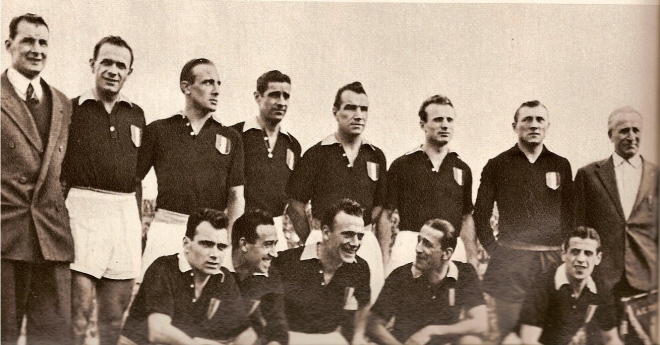 Ernö Erbstein was a coach who created the magnificent and imperious Il Grande Torino, the great Italian side who won five successive Serie A titles in the 1940s. He was tragically killed, along with the rest of the squad, in a plane crash at Superga in 1949.

If you look up his name anywhere on the internet, you won’t find many English articles or stories about him. It’s a tale that was sadly forgotten by the English speaking public but thanks to Dominic Bliss and his exquisite book on Erbstein, his story is now available for anyone who wishes to know more about the legend.

Erbstein was a coach well ahead of time, a pioneer whose influence and methods are felt in today’s footballing world as well. He took the then famous W-M system (or the 3-2-2-3 formation) and using his gifted talents and penchant for getting the best out of players who were discarded by other clubs, he turned average players into world beaters.

Erbstein was a major part of the Jewish-Hungarian football culture in the early 1900s and had begun to make his mark it Italy as a coach but due to the major anti-Semitic sentiment throughout Europe at that time, he was forced to give up his fledgling managerial career in Italy and flee back to Budapest.

Erbstein started his managerial career at Bari in 1928, the season before the creation of Serie A and Serie B. Since this was the last Italian championship season, the teams who finished in the top 9 in their group would qualify for Serie A next season (there were 2 groups, Group A and Group B). Bari, despite their extremely good home form (a trait that would become increasingly familiar in Erbstein’s teams), would only finish 13th and had to settle for a place in Serie B next season.

Erbstein moved onto Nocerina next season, a step down into the Southern Division of the Prima Divisione (the leagues below Serie B were divided into 4 groups – A, B, C and the Southern Division of which Nocerina were a part of). Erbstein guided the team to a joint 2nd finish (the club were expected to finish in the bottom half) but unfortunately, due to financial issues, the directors decided not to stretch the purse strings any further and they dropped a division to the Seconda Divisione.

Erbstein had no choice but to leave the club and by this point, a lot of heads had been turned by this young Hungarian who was taking extremely average sides and giving the big boys a run for their money. One such club, Cagliari, became interested in his services and he decided to try his hand with the I Rossoblu. He led the club straight into Serie B in his first season, with a perfect home record to boot. The team lost just twice all season and qualified comfortably into the second division of Italy’s elite. The team went on to finish 13th in Serie B next season, with their home record being solid again (they lost just thrice at home) and letting in just 38 goals, the fourth best defensive record in the league.

One of the stand out features of every Erbstein team, during his entire career, was solidity at the back, pace on the wings and a center forward who could put himself about physically and finish off the moves that the wingers had started. Erbstein relied heavily on his wingers to track back and win the ball, and then start the counter attack with dizzying speed. His was a brand of total football, 30 years ahead of Rinus Michels and Johann Cruyff.

Erbstein was let go by Cagliari as the board expected the team to get better results than what the coach could coax out of a very workmanlike side. He rejoined Bari for a brief spell before moving onto Lucchese at the start of the 1933-34 season, where he would create the blueprint that would be applied, with stunning results, at Torino a decade later.

Lucchese were in Group F of the Prima Divisione back then, and yet again, using his astonishing repertoire of managerial skills, Erbstein topped their group and won promotion to Serie B next season. They finished a respectable 7th next season, just 8 points off the eventual champions Genova. Next season, they went on to win the division and for the first time in his career, Ernö Erbstein would have a chance of managing in Serie A.

One of the most well known players of this Lucchese team was the goalkeeper Aldo Olivieri. Erbstein, throughout his coaching reign, always had an eye for talent in the lower leagues and since his teams could never compete with the big teams financially, he looked to promote youth both from within the club as well as the lower divisions. Olivieri would go on to to win the World Cup with Italy in 1938 and is still regarded as one of the Italian greats.

Lucchese would go on to finish the next season in 7th place and by this point, the Torino president, immensely impressed by this Hungarian’s forward thinking approach to coaching, had lured Erbstein to Turin. But the following season, Erbstein’s off field problems would well and truly begin. As the Nazi campaign gained steam, Mussolini’s Fascist movement allied with them the noose on the Jewish community in Europe tightened. Erbstein fled back to Budapest with his wife, Jolan and his two daughters, Susanna and Marta. For the next 6 years, Erbstein’s primary job became the survival of his family. As the Germans realised that they were losing the war, their focus turned to eradicating as many Jews as possible. The net closed in on Budapest and Erbstein had to join a labour camp or face the penalty of death.

Fortunately for him, the commander of the group he was in was a man he had fought alongside at World War 1 and with his help, Erbstein managed to stage a miraculous escape with 4 other prisoners (one of them being the legendary future Benfica manager Bela Guttman) and the family was reunited soon after the Russians broke through in Hungary. You can read the full story of his struggles during the war here.

Even during the war years, it emerged that Erbstein had been making clandestine trips to Turin to help scout players and impart advice to the Torino president, and this helped create a bond of mutual friendship between the two. Once the war was over, Erno came back to Torino in the role of a technical advisor and what he considered his team. The team, led by the captain Valentino Mazzola, would win the Scudetto every year till the plane crash. The fluidity of the team, the way the wingers moved inside and the inside forwards moved to the wings, the center forward dropping off and the inside forward or the center half making a run into the box to finish off a move against Juventus, was a hallmark of the side Erbstein had built since 1938.

Unfortunately, Erbstein’s fledgling career was about to be cut brutally short. The plane carrying the Torino squad back from Lisbon after playing a friendly, was flying low due to heavy fog and zero visibility. The pilot did not see the Superga hillside and crashed the plane into a church wall. All 32 men on the flight died immediately, some only recognisable by the things in their pockets.

Over 500,000 people turned out for the funeral procession, such was the love and attention Erbstein and his Torino side had earned from the industrial town. His daughters, when they heard the news, went into shock and have not recovered fully since. Here was a man in the prime of his career who was taken from the world by ill fate, a man who gave the world so much and still had so much left to do.

There are not enough column inches I can dedicate to this man and to the great Torino side. I would highly recommend reading the book by Dominic Bliss to gain more insight into the world of Ernö Erbstein.

Ci manchi, Ernö Erbstein. Thank you for beginning a revolution the ripples of which are still felt in the footballing world.