He came, he played, he conquered. Those words have never rung more true in the case of Henrik Larsson’s incredible impact on Manchester United in the winter of 2007. 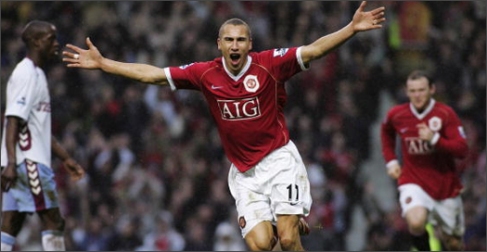 Larsson won the unqualified admiration and respect of Sir Alex Ferguson during those two months. However, as the United manager revealed later, he wanted to sign the Swedish striker when he was still in his prime at Celtic but was rebuffed by Celtic’s majority shareholder, Dermot Desmond.

“I was ready to make the bid when he was at Celtic but Dermot Desmond rang me and said, ‘You’ve let me down, Alex, you’ve got tons of players, we need him.’ ”

Manchester United had not won the league since 2002-03 and with Roman Abramovich’s riches and Jose Mourinho’s arrival, their barren run in the Premier League, already stretching to 3 years (their loges drought in the Premier League era), looked set to continue in 2006-07. Gary Neville admitted the players were beginning to doubt if they would ever taste the glorious scent of success domestically with Chelsea seemingly romping away with all there was to win.

But with Cristiano Ronaldo finally starting to mature and forming a telepathic partnership with Wayne Rooney, the Red Devils started to mount a very serious siege on Chelsea’s dominance and found themselves top of the table going into the new year. But with the perennially injured Louis Saha and with Ole Gunnar Solskjaer entering the winter of his career plagued by knee injuries, Sir Alex decided to delve into the transfer market for a temporary stop-gap solution in January to keep the embers of United’s title charge burning till May.

And as has happened so many times in his glittering 26-year old reign at Old Trafford, Sir Alex Ferguson struck gold.

Henrik Larsson arrived from Swedish side Helsingborg on a two-month loan and his impact, on the whole United dressing-room, was immediate. Every player was lifted just by the presence of this great striker they had heard so much about and Sir Alex had this to say about him:

“On arrival at United, he seemed a bit of a cult figure with our players. They would say his name in awed tones.”

Larsson was a little surprised himself when he first heard of United’s interest:

“The first I heard of it was when the Helsingborgs manager, Stuart Baxter, came to see me and asked me if I wanted to go to Manchester. My immediate reaction was ‘yes’ and I felt very excited but I wanted to speak to my family about it before I agreed anything. But, once I’d discussed it with them, they were all in agreement that I should do it. I looked at the situation and knew that, at my age, I probably wouldn’t get this type of opportunity again.”

Larsson, throughout his career, was known not only for his prowess in front of goal, but his marvellous footballing brain and intelligence which made him such a force in the 18-yard box. It is exactly this trait that won Sir Alex over.

“For a man of 35, his receptiveness to information on the coaching side was amazing. At every session he was rapt. He wanted to listen to Carlos, the tactics lectures; he was into every nuance of what we did. In training he was superb: his movement, his positional play. His three goals for us were no measure of his contribution.”

His United career could not have got off to a more picture perfect start. At home to Aston Villa in the FA Cup, United were struggling to break down a resolute Villa defence featuring future English international Gary Cahill. In the 55th minute, Michael Carrick, signed in the summer and so often the focal point of every Manchester United attack, found Cristiano Ronaldo 30 yards from goal. Ronaldo, closed down quickly by the Villa defence, laid it off to Rooney who swivelled on the ball and played a slide rule pass to Larsson.

Larsson was being immediately harried by two Villa defenders but his feather-like first touch was exquisite and allowed him to get his effort away with no back lift. Thomas Sorenson, Aston Villa’s goalkeeper, stood and watched as the ball flew past him and nestled in the back of the net.

Every single Red shirt raced to congratulate and celebrate with Larsson as the roof flew off Old Trafford. The stage was set and as per the script, Henrik Larsson duly delivered.

He went on to score his first and only Premier League goal against Watford and also grabbed a priceless winner against Lille in the first knockout round of the Champions League. What is so special about that goal was not the finish, but the build-up that led to his header. He dropped off on the halfway line and as soon as Ronaldo received the ball on the left-wing, Larsson made his run into the penalty area. Ronaldo floated the ball bang on the penalty spot and Larsson, having rolled off the attentions of the Lille center-back, calmly headed it into the bottom corner to secure United’s progress.

Sir Alex revealed that after he had played his last game for United against Middlesbrough, the players and the staff gave him a send off he is unlikely to forget for a long time:

“In his last game in our colours at Middlesbrough, we were winning 2-1 and Henrik went back to play in midfield and ran his balls off. On his return to the dressing-room, all the players stood up and applauded him, and the staff joined in. It takes some player to make that kind of impact in two months.”

United were desperate to extend his loan till the end of the season but Larsson had made a promise to his family that he would return in March, would not be swayed. Despite this, Sir Alex had nothing but words of praise for him:

“He’s been fantastic for us, his professionalism, his attitude, everything he’s done has been excellent. We would love him to stay but, obviously, he has made his promise to his family and Helsingborg and I think we should respect that – but I would have done anything to keep him.”

United subsequently went on win the Premier League and Larsson got his medal through special dispensation by the Premier League panel even though he did not play the required ten games that are needed to get that accolade. His last appearance at Old Trafford came a few weeks after he had left United when he captained a Europe XI side in a UEFA Celebration Match. He was given a memorable and rapturous standing ovation by the United fans.