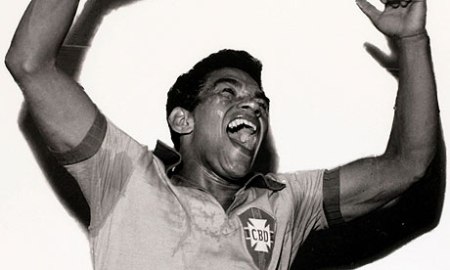 Perhaps “remembering” Garrincha is a step too small, even though he remains one of the greatest players to have graced the game. Perhaps the phrase “beautiful game” was coined just looking at this magician’s prodigious talent. This is a player who should be celebrated and not forgotten and written off as yet another tale of a flawed genius who let drink get the better of him.

It is truly tragic that we live in a world so rich most people don’t even know his name.

This world has a cruel way of bashing the genius out of a man, throwing him out and labelling him a freak because he’s different from the rest. But some geniuses endure the test of time. Garrincha is one of those timeless geniuses.

Those who saw him play claim he was better than Pele. Perhaps there’s a certain romanticism to the whole thing, but there was no doubt about Garrincha’s ability to entertain. One of his best characteristics, and one of many reasons why he was so loved in his native Brazil, was that he played in the moment without a care in the world. He was never worried about winning or losing, trophies or accolades – all he wanted to do was play football.

One of his famous stories goes like this – when he saw his team mates celebrating their triumph in the 1958 World Cup, he stood on the pitch bemused because he had remarkably misunderstood the tournament format – he thought they were going to play all the team twice before the final.

Garrincha, nicknamed “The Little Bird”, is hailed as the best dribbler in footballing history. He absolutely, completely and utterly owned the 1962 World Cup. Brazil’s opponents in the semi-finals were Chile whose approach during the whole game was to scythe down Garrincha at his knees in order to stop him. Garrincha scored twice as Brazil won 4-2.

Another tale has it that when playing against the Soviets, Garrincha faked his way past a defender so emphatically, the opponent fell flat on his back. Garrincha turned around, helped him up, then beat him again.

He was born with crooked legs, a curved spine and a left leg longer than his right. His magnificent talent on the pitch was matched by his absolute disarray off it. He was flawed, but he loved what he did to his dying breath.

This was Garrincha – a joy to the people, the angel with the bent legs, whose outstanding ability with the ball was never matched. Raise a glass, tip your hat, bow down to a man who truly made football the beautiful game.