As Paul Scholes decided to hang up his boots at the end of last season, the consensus was that Manchester United would go all out to sign a playmaker in the summer transfer window. For quite a while Wesley Sneijder’s arrival seemed imminent but his ludicrous wage demands led to an impasse and eventually contract negotiations broke down. Luka Modric rejected a move to Manchester with his heart set on a move to Chelsea (which was also scuppered due to Tottenham’s insistence to keep hold of him) and there was a gloom in the air as the Manchester derby loomed large on the horizon, the first meeting between the cross town rivals with the gap in quality narrow than ever.

United’s new signings were paraded out at Wembley but had a first half to forget, none more so that David De Gea. Whether he was at fault for the first goal is debatable, but he was certainly culpable for the second as Dzeko’s long range effort squirmed under his body. The press had their headlines written, the world had written United off and City were to be heralded as the new kings of England – the power shift being predicted in pre-season now all but confirmed.

But such is the fickle nature of the human mind in this day and age that they tend to write off people too easily. Very casually and without a second thought they had written off a Sir Alex Ferguson team with 45 minutes left to play. And as has been the norm for the past twenty years, the press were forced to scratch off the headlines and the script was torn to shreds yet again by Manchester United, Tom Cleverley’s substitution at half-time changing the whole complexion of the game as the defending champions slipped into irresistible mode. Nani was the tormentor in chief, and while his winner in injury time brought wild celebrations from the red half of Manchester, it was his second goal, the equalizer, that will remain indelibly etched in people’s mind. A sublime one touch passing move from the United front men ended up with Cleverley slipping in Nani who calmly lifted the ball over Joe Hart.

It was to epitomize the way United would start the Premier League season – an 8-2 hammering of Arsenal followed by a 5-0 win at Bolton. But it was during the Bolton game that Cleverley suffered a broken foot, an injury that would derail United’s momentum. United started to lose rhythm and the lowest point of the season was around the corner as Manchester City produced one of the most spell binding performances of the season at Old Trafford as they ran out 6-1 winners. Jonny Evans, much lamented by the United fans, was sent off in the second half as United collapsed. It turned out to be a blessing in disguise, albeit not a very pleasant disguise, for the Irishman. It was to be the making of Evans, an unexpected but welcome boost for United who had lost their captain, Vidic, to a horrific knee injury. 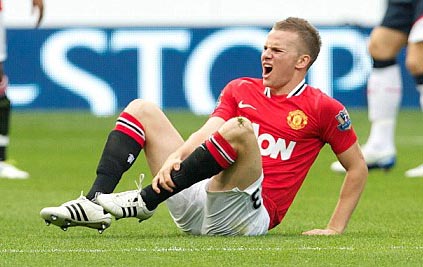 And yet again, the press went all out in claiming that the power had shifted, Manchester United were all but finished and Ferguson had finally lost his grasp on reality. And yet again, the wily old Scotsman rose to the challenge. The following weeks produced some unconvincing yet much needed victories and United racked up 1-0 score lines at Everton and Villa.

Manchester City, in the meantime, were going all guns blazing with David Silva and Sergio Aguero in sparkling form. United continued their march in the league, despite showing some indifferent form in Europe.

And then came, what can be described as the ‘turning month of the season’. The Citizens suffered their first defeat of the season at Chelsea, the beginning of what went on to be a terrible away record. While the Etihad stadium proved to be a fortress, City were suddenly vulnerable away from home. After West Bromwich held them to a goalless stalemate, Sunderland snatched a dramatic late winner the following week. Everton, courtesy ex-United player Darron Gibson, stunned the Blues and suddenly Roberto Mancini’s men were looking tired and beatable.

Manchester United had started to come strong during this period, as they traditionally do during the second half of the season. The astonishing return of Paul Scholes from retirement brought some much needed calm in midfield as the red half triumphed over the blue in the FA Cup.

It has been smooth sailing for United ever since, and the form of Antonio Valencia and the ever present and tireless Michael Carrick has contributed to one of the most stunning team performances in the Premier League era. A team who didn’t have much individual quality at the start of the season and had been written off are currently sitting 5 points clear at the top of the table with a favorable run of fixtures.

It is a testament to Sir Alex Ferguson and the depth of this United squad that they are where they are. A 20th English league title is within their grasp, made all the more sweeter by the fact that it is Manchester City they are going to pip to lift the coveted trophy.